Every landscape possesses a unique vocabulary. In Colorado’s Rocky Mountain National Park, for instance, boulders scattered across the moraine below Long’s Peak contribute to the landscape’s singular identity, as does the edge of the meadowland lined with Engelmann spruce, aspen, and Douglas firs, the snowmelt creeks flowing down from the high country, down through the forest, and into the headwaters of the Big Thompson River which meanders between the rocks deposited by glaciers that disappeared hundreds of thousands of years ago. Each part of that valley contributes to beauty of the whole. A hundred miles to the east, the plains of Kansas, now mostly an engineered agricultural landscape, consist of vast fields of wheat, soy beans, or corn, and along I-70, as night begins to fall, one sees illuminated signs affixed to colossal metal poles rising high above the flat expanse, their advertisements announcing the next junction town’s selection of gas stations, franchise restaurants, and chain hotels. The vocabulary of a landscape, whether it be natural, rural, or urban, is specific and also finite, and therefore it is, once one is attuned to it, readable, photographable. 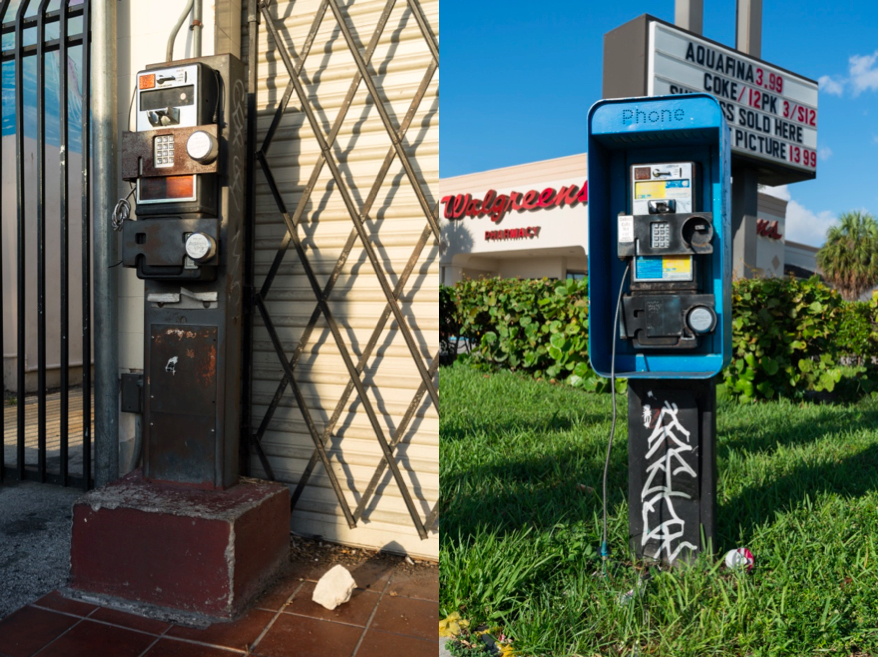 The urban landscape possesses a vocabulary unto itself: street signs, parking meters, sidewalks, bus stops, restaurants, automobiles, laundromats, delivery trucks, light poles, mailboxes, traffic signals, graffiti, dumpsters, parking garages, strip malls, high rises, houses of worship, apartment buildings, alleyways, bridges, underpasses, chain link fences, auto repair shops, razor wire, warehouses. . . The list goes on, but not infinitely. In the tradition of wilderness landscape photography, I don’t include people in my shots. Nevertheless, the human presence is visible upon the subject matter (just as the scar left by the glacier is visible upon the rock), for every inch of what is photographed in the city was engineered and built by human beings—almost all of it manufactured. 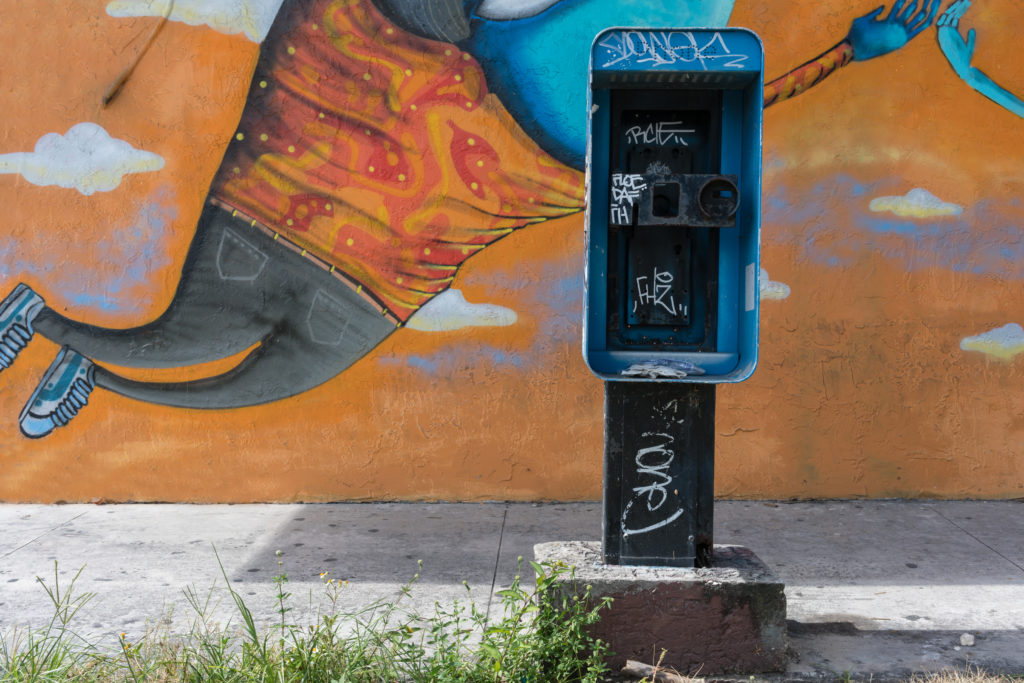 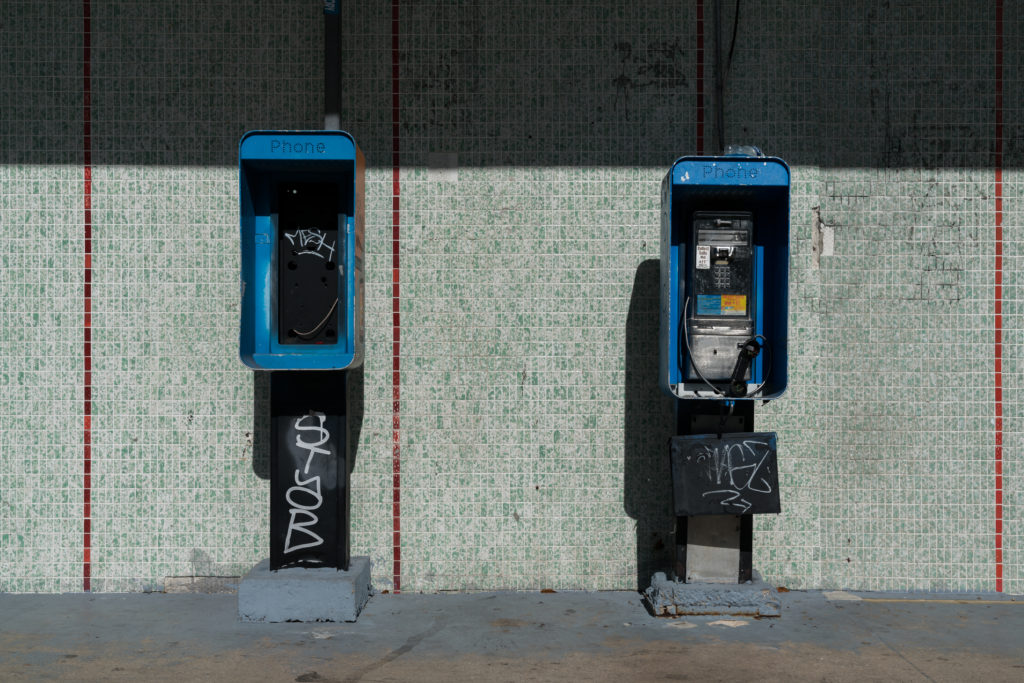 Several themes seem to attract me when I consider the urban landscape as subject matter for photography, one of them being communication, or the lack thereof. I am attracted to barriers of all kinds, walls, fences, gates, barred windows and reinforced doors—great shadow catchers, and also structures designed to impede access. I am interested in concrete, metal, glass, paint, and plastic, the manmade materials used to construct the built environment, and how those materials have replaced, concealed, or covered up the ground people might otherwise walk upon, the earth hidden under a hard, grey-black shell of concrete and asphalt. I am interested in how our dependence upon the automobile, and the need to park it when not in use, has caused native grasses, flowering plants, and the trees to be replaced by lots and colossal garages that take up thousands upon thousands of acres of city space. 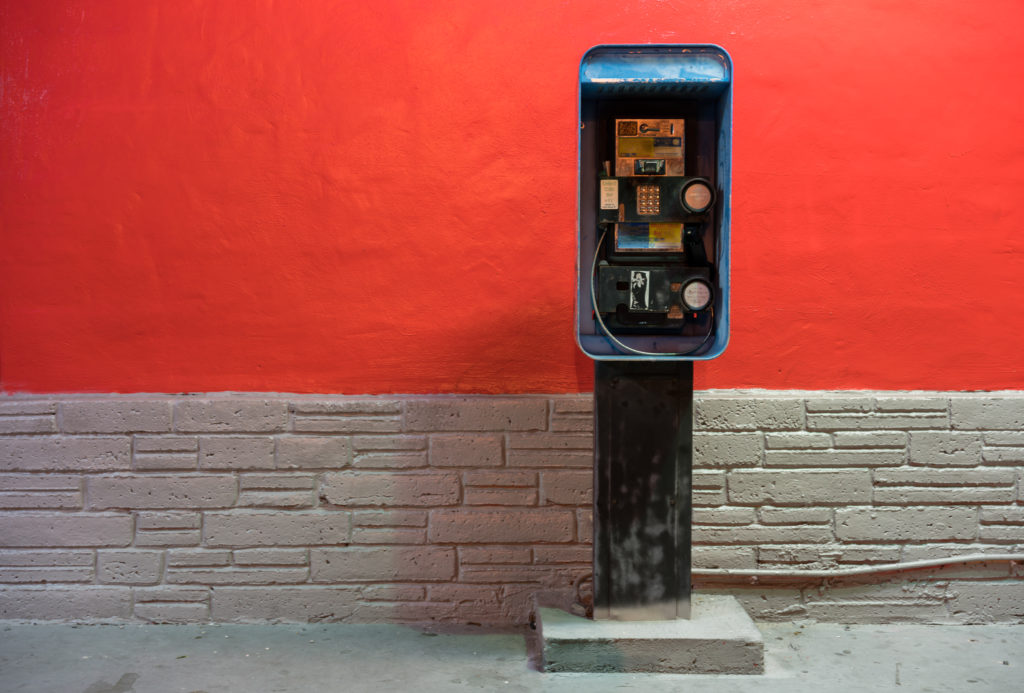 Many objects punctuate the urban landscape and reveal the narrative of the people who designed and built it. The dead pay phone is one such object. As its intended use has faded over the past ten or fifteen years, it has been transformed from a practical, useful, profitable, utilitarian device into an empty totem, both hideous and significant. Rather than serving as a tool to connect individuals, the dead pay phone can now be seen as a representation of what has happened to people cut off from the mainstream, a depressing depiction of the poor communities in which they are found. In Miami they can be seen in the neighborhoods of Opa-locka, Little Haiti, Little River, El Portal, North Miami, parts of Hialeah, and Wynwood. Dead pay phones have come to represent outdated modes of communication, social impotence, missed opportunities, missed connections, wasted resources, and most of all wasted time. 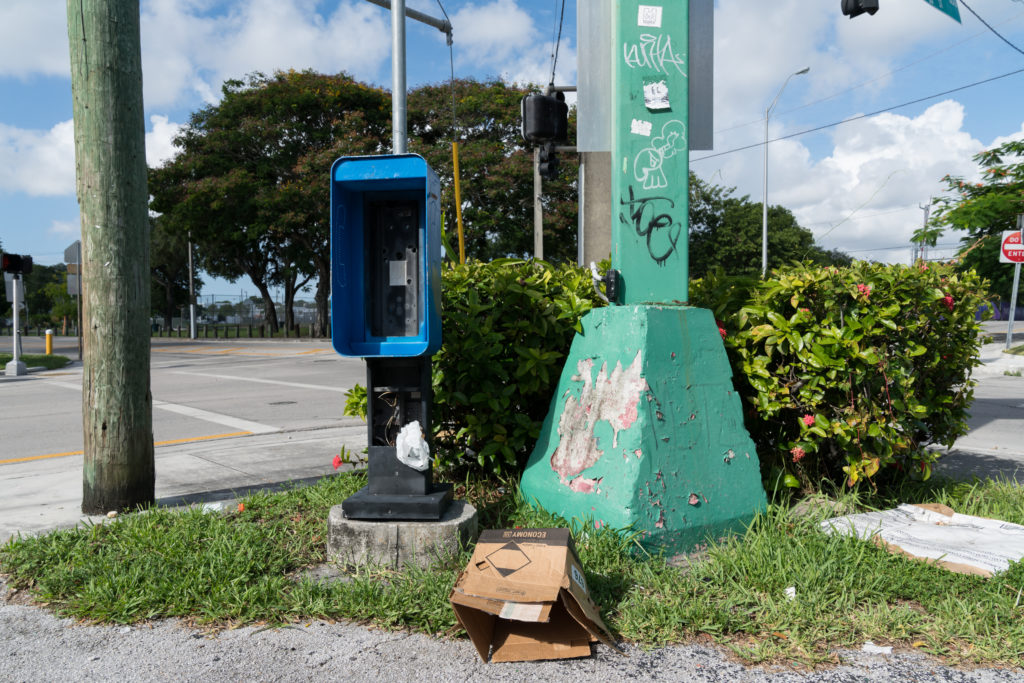 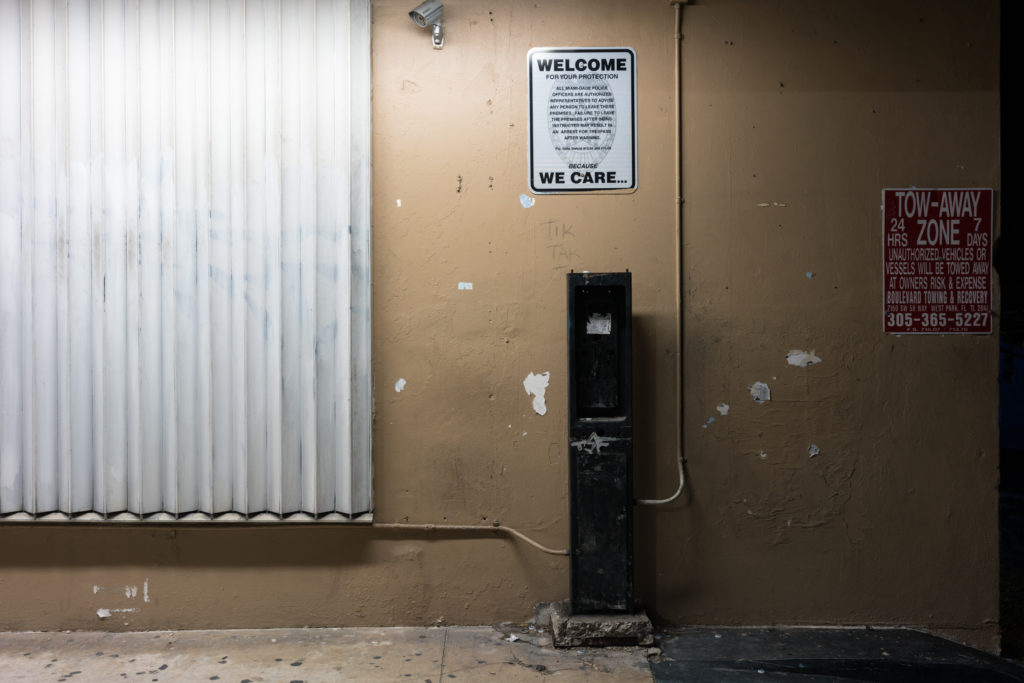 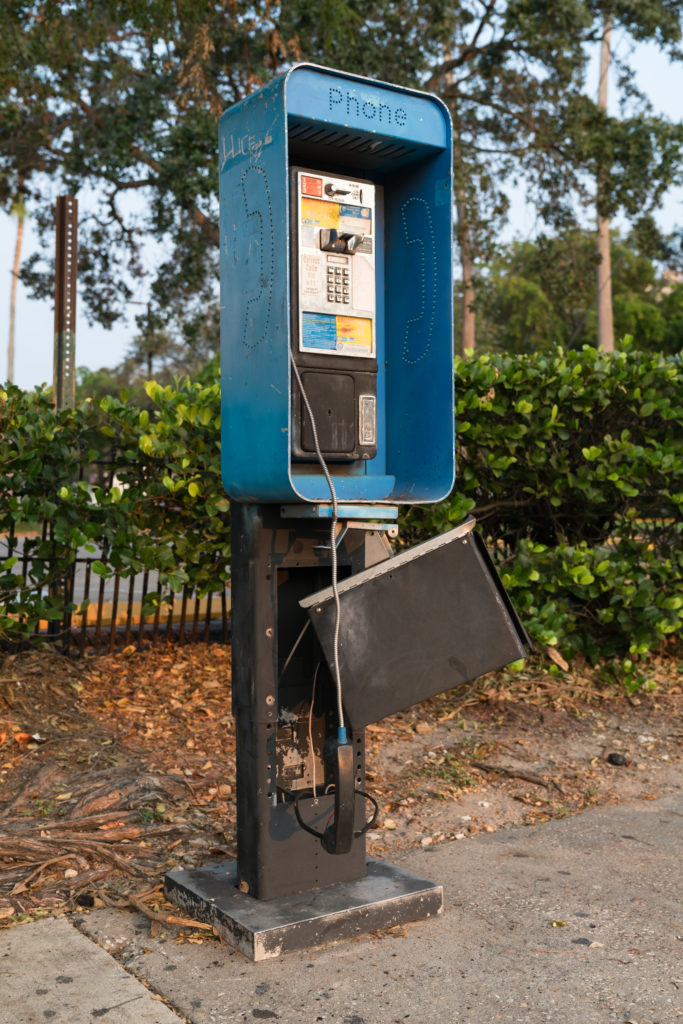 The pay phone has a long history, and in 1891 William Gray, anticipating its money-making potential, patented the first coin-operated device, installed on a street corner in Hartford, Connecticut.[1] For over 100 years public pay phones have contributed to the notion of universal access to basic communication services. The business model is (very soon we will be able to say was) rather strait forward. By an agreement with the landlord, either the phone company pays rent for the location and keeps the revenue, or the landlord pays rent for the phone and shares the revenue with the phone company. 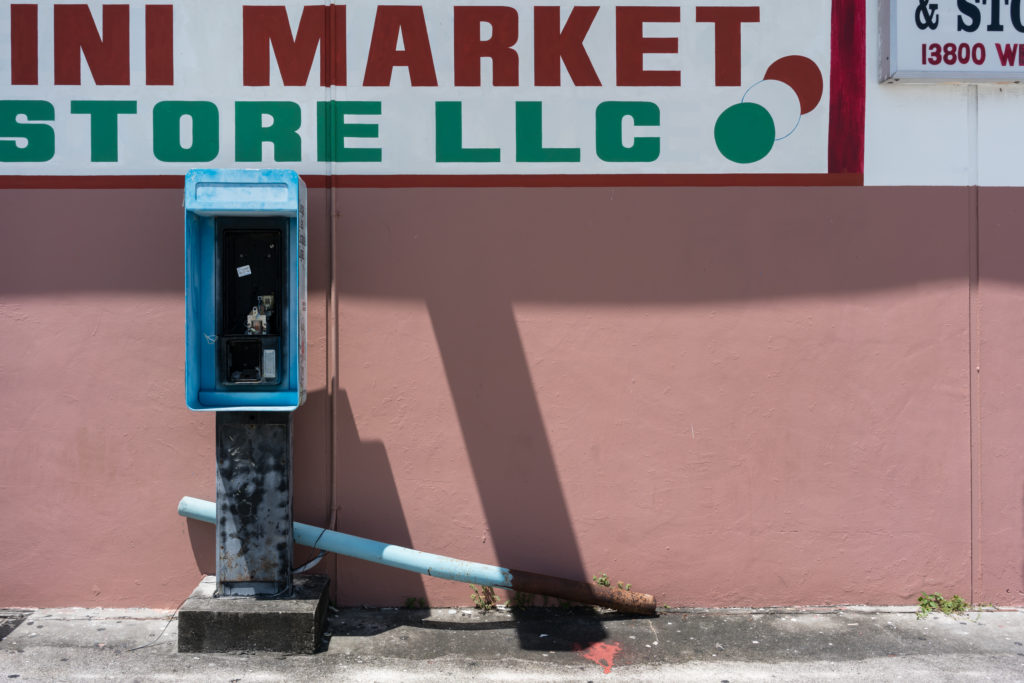 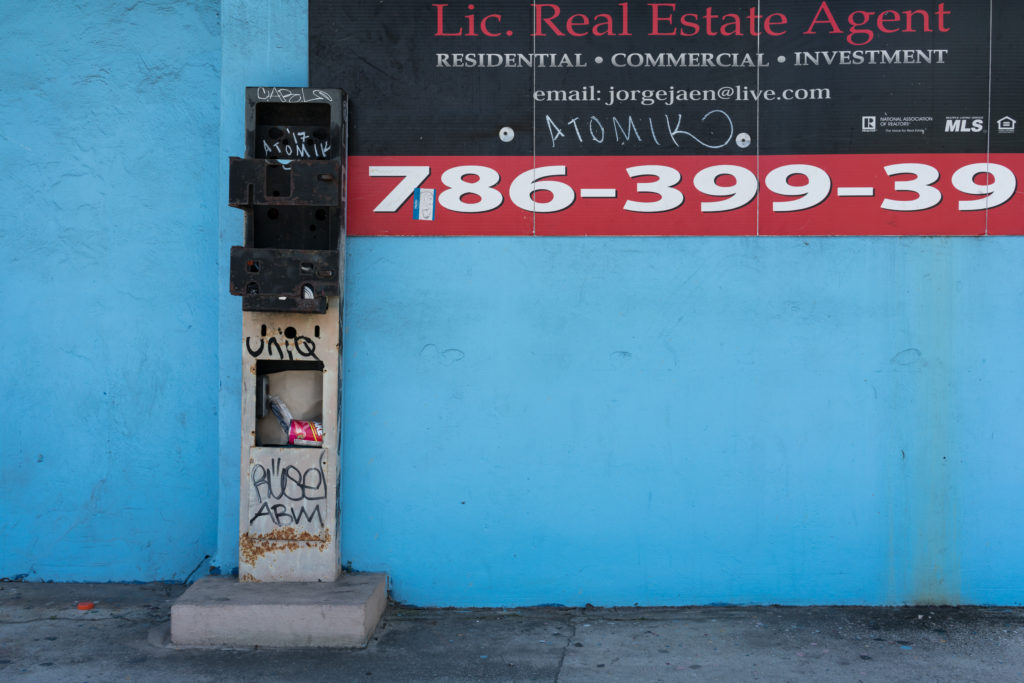 Cellular phones, universally available in developed countries since the early 2000s, have caused the use of the public pay phone to decline at an astonishing rate. Rarely has a piece of technology become so rapidly obsolete. Consider this. The peak number of pay phones in the United States was almost 3,000,000 million in 1995. By the end of 2016, the number of functioning pay phones has plummeted to fewer than 200,000.[2] The pay phone—unnecessary, unprofitable, and obsolete in middle income and affluent communities—has become extinct. In those communities, the phones have been removed. Not so in poor neighborhoods, where they remain. 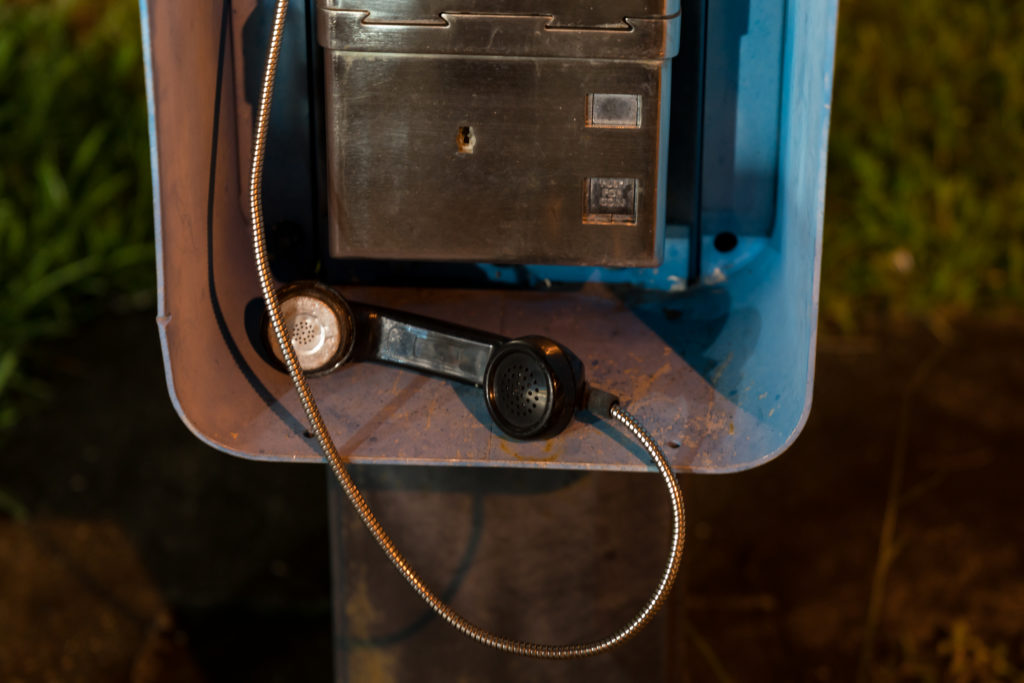 Dead pay phones now exist as relics scattered throughout the urban landscape. To prevent theft, pay phones were installed in a robust manner. The phone and its protective cowl is secured permanently to a thick steel stanchion imbedded in a concrete mass weighting hundreds of pounds. Sometimes the phones are affixed without the stanchion to an exterior wall of a building. In many cases, if the phone has become damaged or vandalized, it is more cost effective for the phone company or the landlord to abandon the pay phone rather than to have workers make repairs or remove it and rehabilitate the site. Unmaintained pay phones are vandalized, stripped of metal to sell as scrap, or the coin boxes plundered by desperate homeless people or drug addicts. In some cases, the pay phones have been partially removed, leaving behind only the vertical metal base. One can find dead pay phones at old gas stations, convenience stores, liquor stores, bodegas, sketchy motels, or coin laundry facilities. Too much of a bother and too expensive to remove (permits are required, electrical conduits need to be safely dealt with, the waste needs to be hauled to a dump, invoices need to be created, people need to be paid), dead pay phones, the technological tombstones of a not-so-distant past, contribute to urban blight.

The dead pay phone series can be viewed as an archaeological endeavor, an excavation of the present. One can witness signs of the human presence left upon on them: the tag of the graffiti artist, the smashed receiver preserving the rage of the phone’s final caller, the trash stuffed into the rectangular space by those passing by—the beer bottle, the soda can, the hamburger wrapper, the brown paper bag—the pay phone repurposed as a receptacle its nobody’s job to empty. Dead pay phones represent poverty, forlornness, and indifference, as well as the problematic nature of modern communication, especially in the most vulnerable sections of the cities in which they are found. 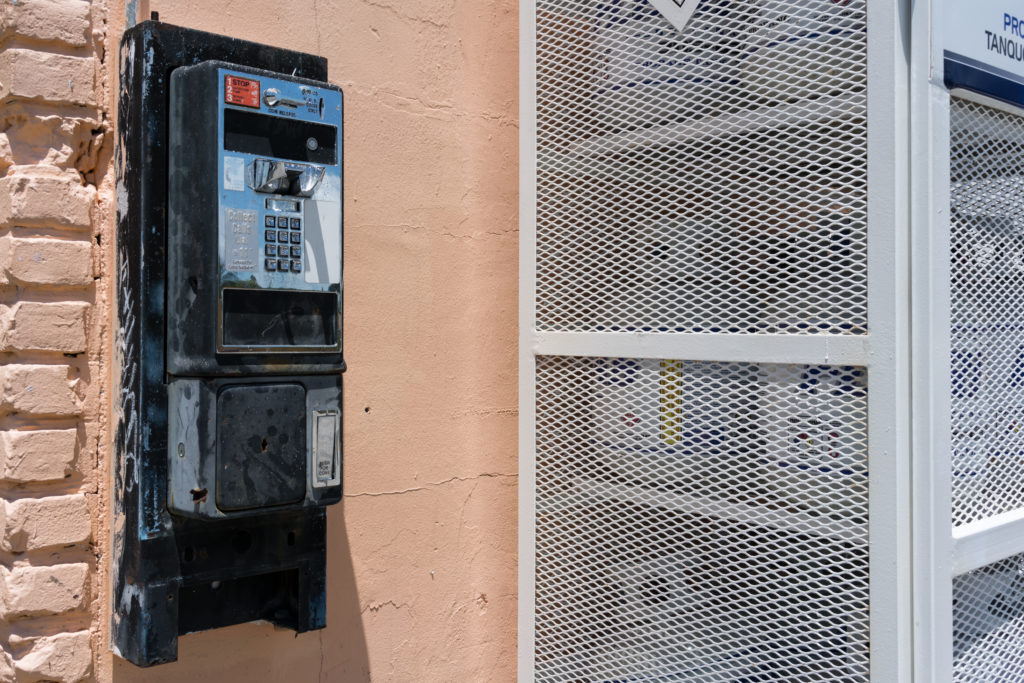 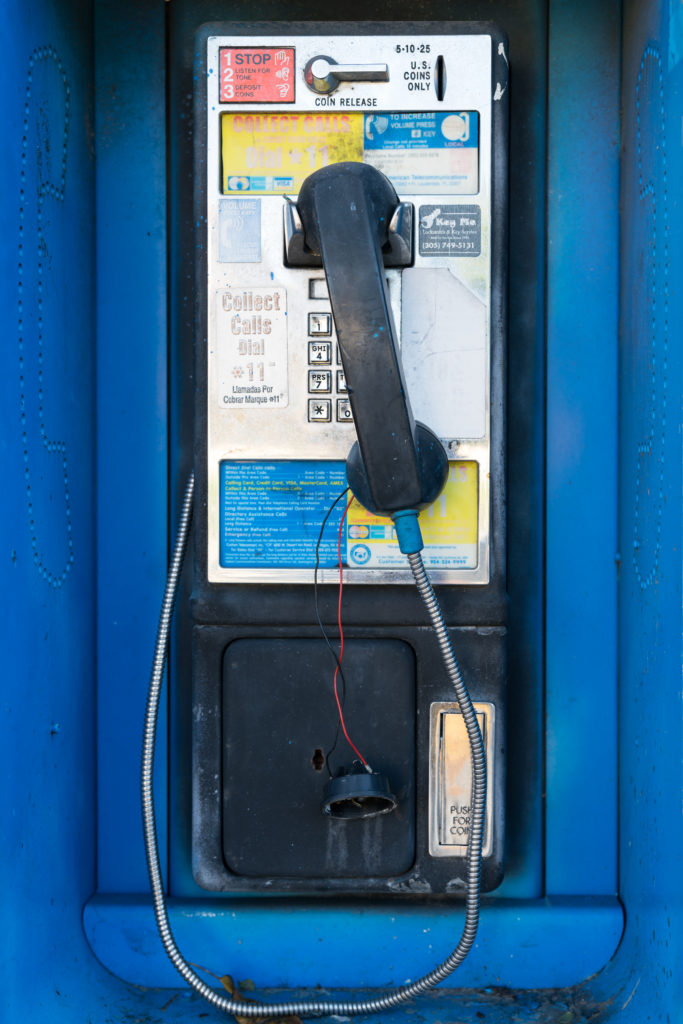 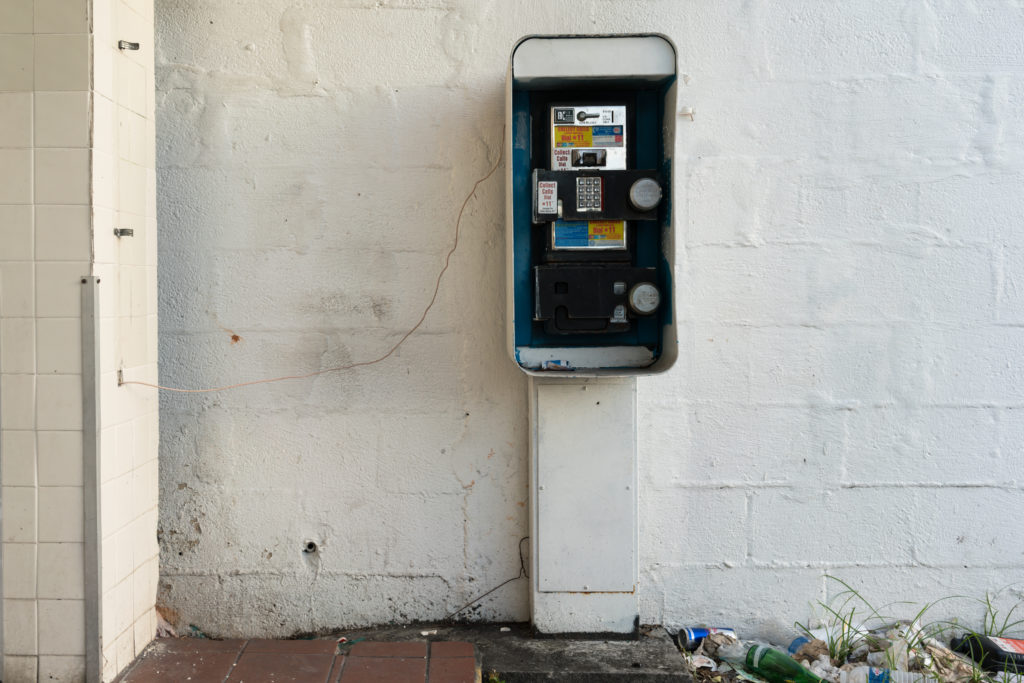 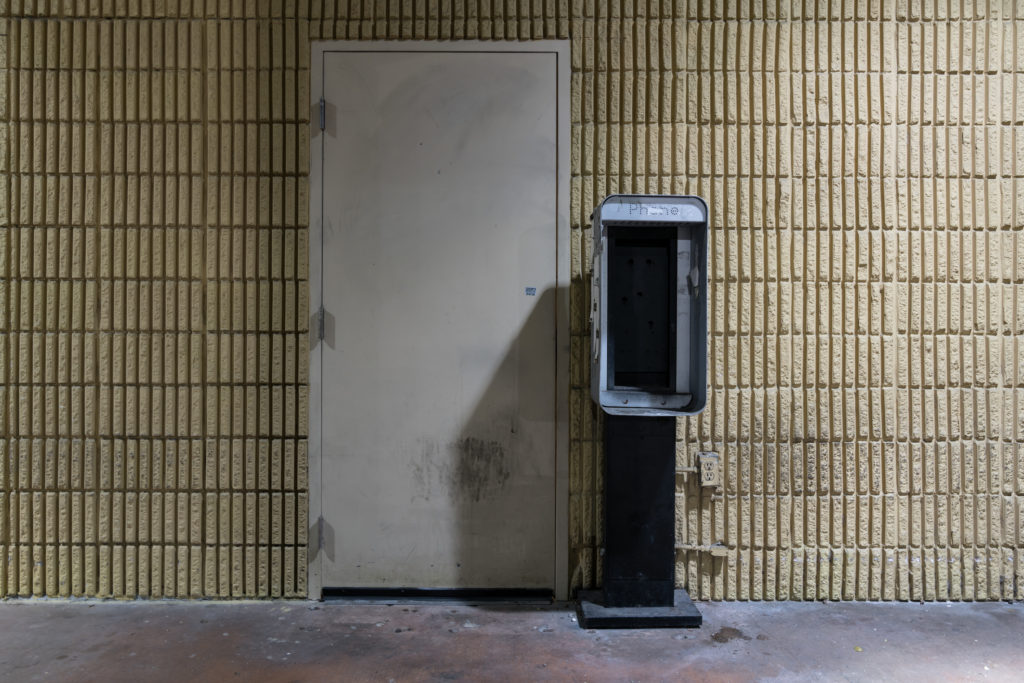 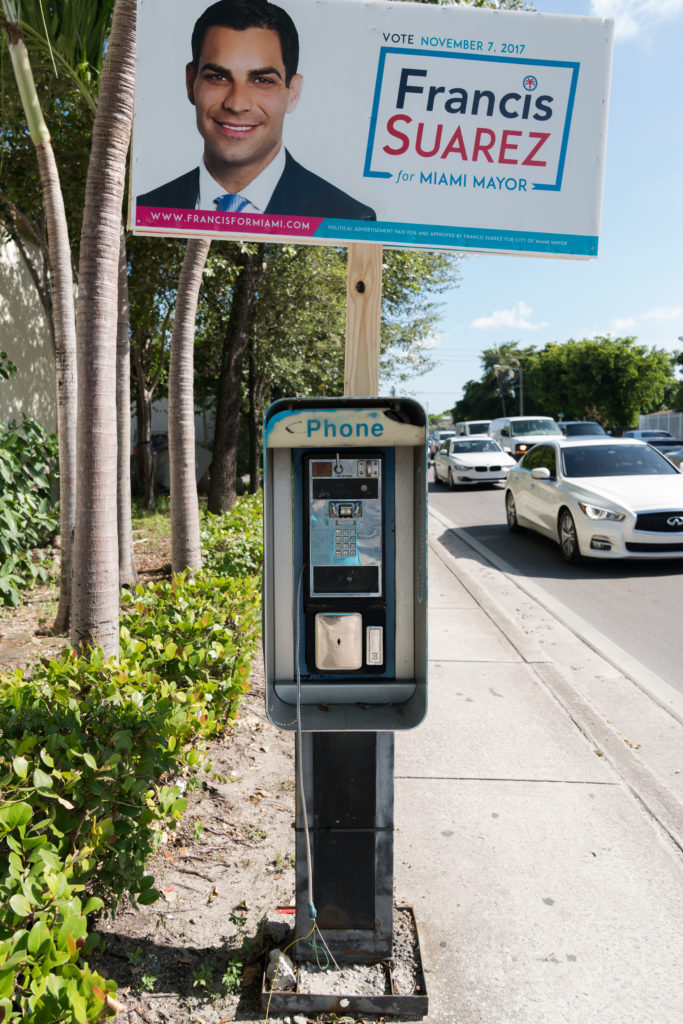 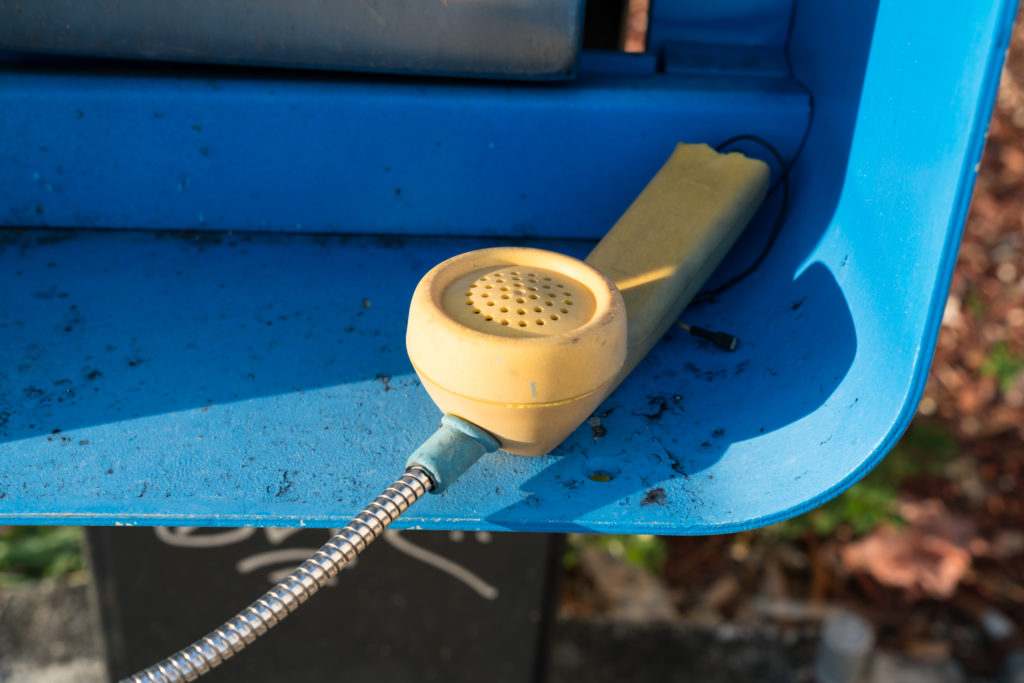