On Sunday, November 8, 2015, at a vacant lot in downtown Bogotá, hundreds of volunteers painted and reupholstered the carroças (Portuguese for “carts”) of informal recyclers, who earn a living by salvaging materials from the waste stream. This was the first edition of Pimp my Carroça Colombia, a transnational movement that uses political art to increase the visibility of some of the world’s most undervalued workers. 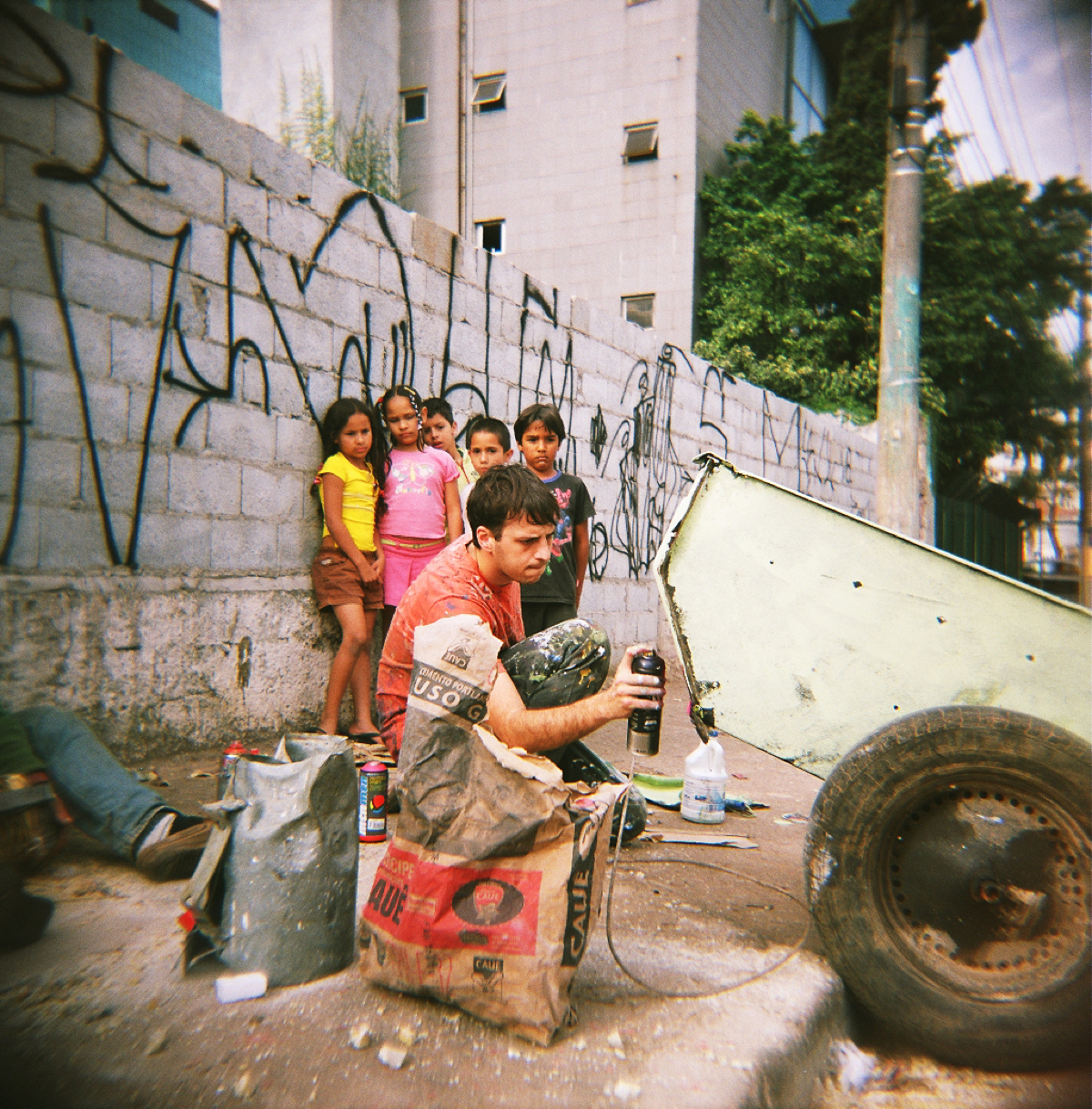 The movement’s origins date to 2007, when a 20 year-old Brazilian graffiti artist named Thiago Mundano began befriending recyclers and painting their carts in his home city of São Paulo. Mundano calls the recyclers “invisible superheroes” because though their labor provides great ecological and economic benefits, they rarely receive state compensation or protections like other waste management workers. To the contrary, they commonly face hazardous working conditions, extreme exploitation, police harassment, and public scorn. 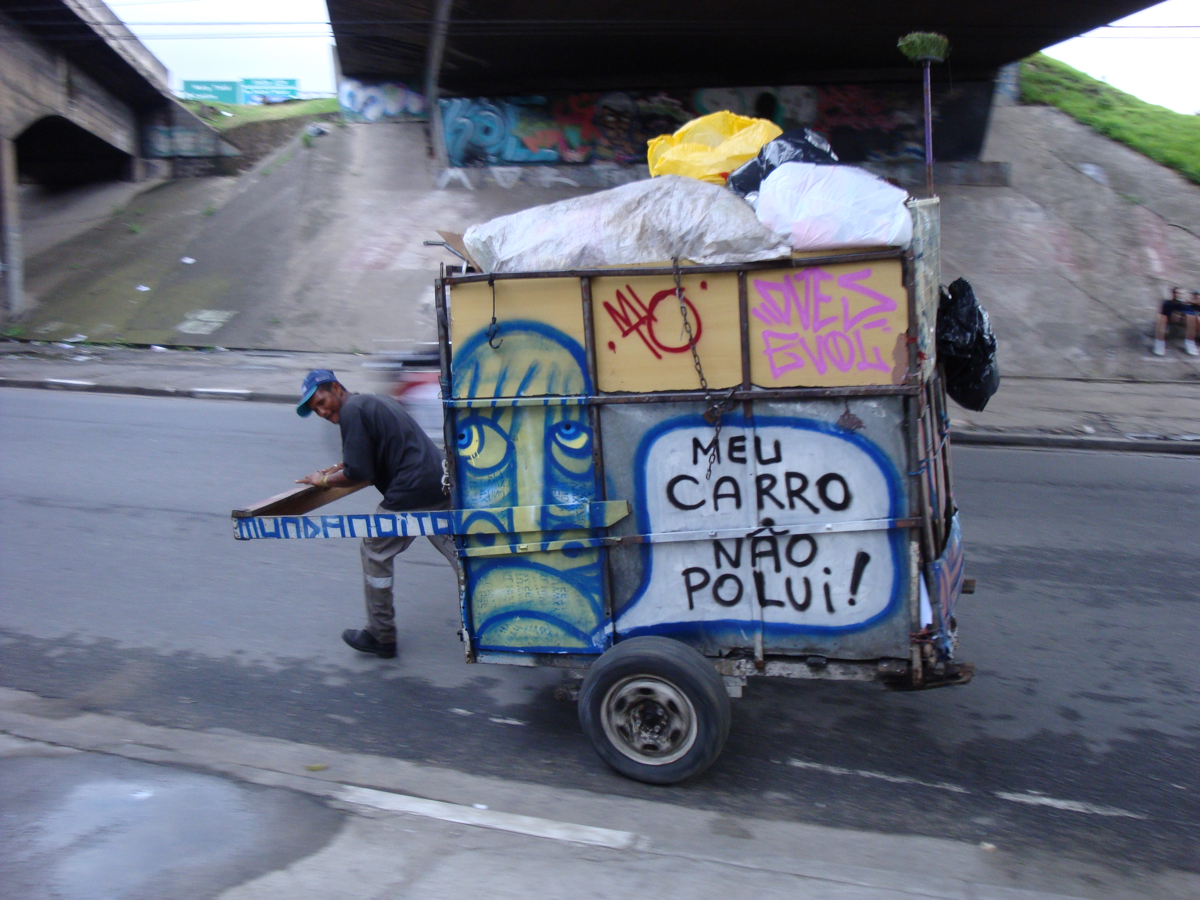 By linking a marginalized art form (graffiti) with marginalized workers (recyclers), Mundano sought to raise the status of both. Over the next five years, he painted 160 carts with funky cartoons and humorous messages like “my car doesn’t pollute” and “my work is honest, how about yours?” It was a good start, but Mundano soon realized that the scale of the problem that he sought to address—15 million recyclers worldwide working without recognition–far outstripped his capacities as a one-man-show. 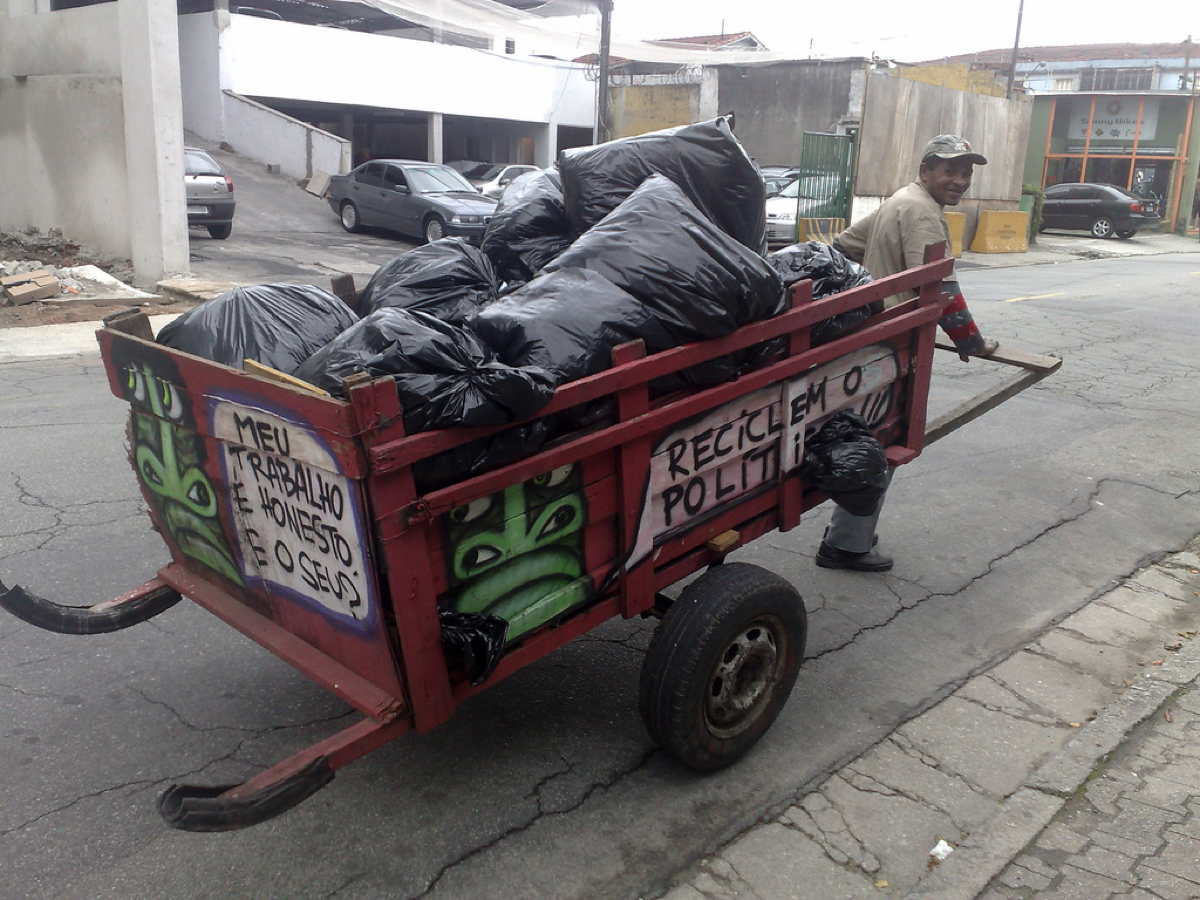 In 2012, Mundano enlisted friends to create Pimp my Carroça, a play on words of the MTV show Pimp my Ride; however, instead of souping up old cars, Mundano and his camaradas (pals) hosted large crowd-funded events in which volunteers paint and reupholster recycler carts, provide social services, and make “artivist” interventions (e.g., painting recycler logos on bike lanes and parking spots to support recyclers’ right to the street). Four years later, Pimp my Carroça has painted 507 carts in 32 cities and 8 countries, with the help of 1,443 volunteers and 2,686 donors. 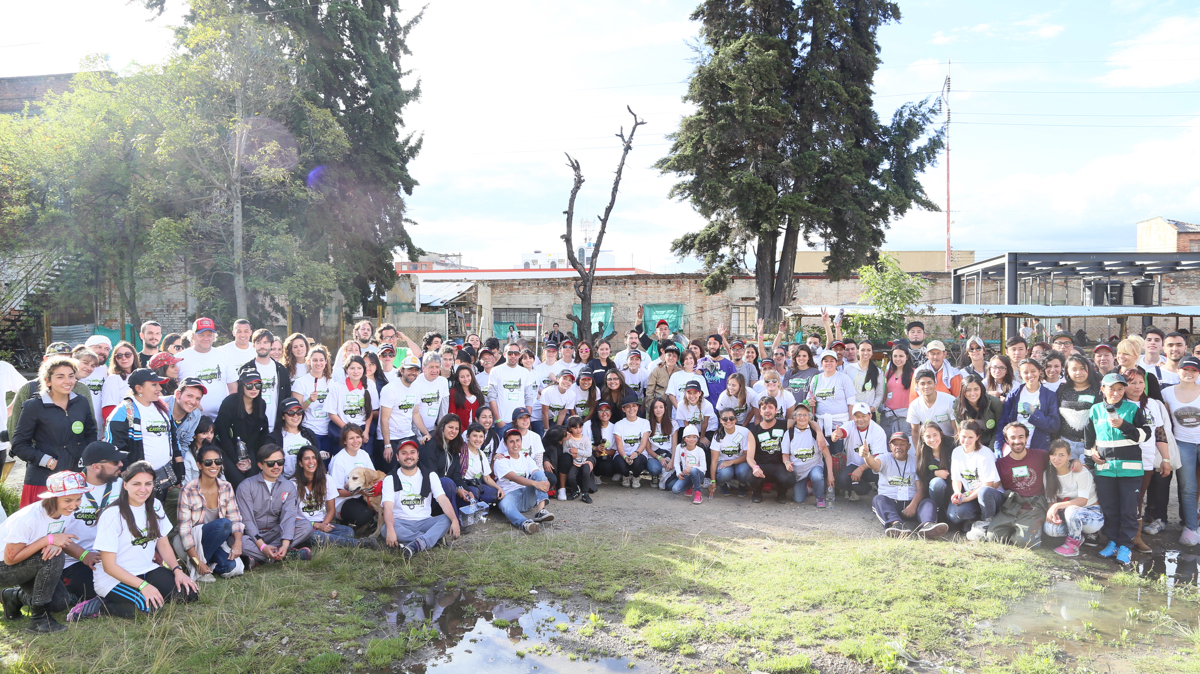 In the summer of 2015, a Bogotá-based environmental services company called Ecoworks organized a kickstarter campaign to host what would be the largest Pimp My Carroça event outside of Brazil to date. After a week of non-stop thunderstorms, the sun emerged on the day of the event and beamed brightly on the 240 volunteers and 40 recyclers who participated. 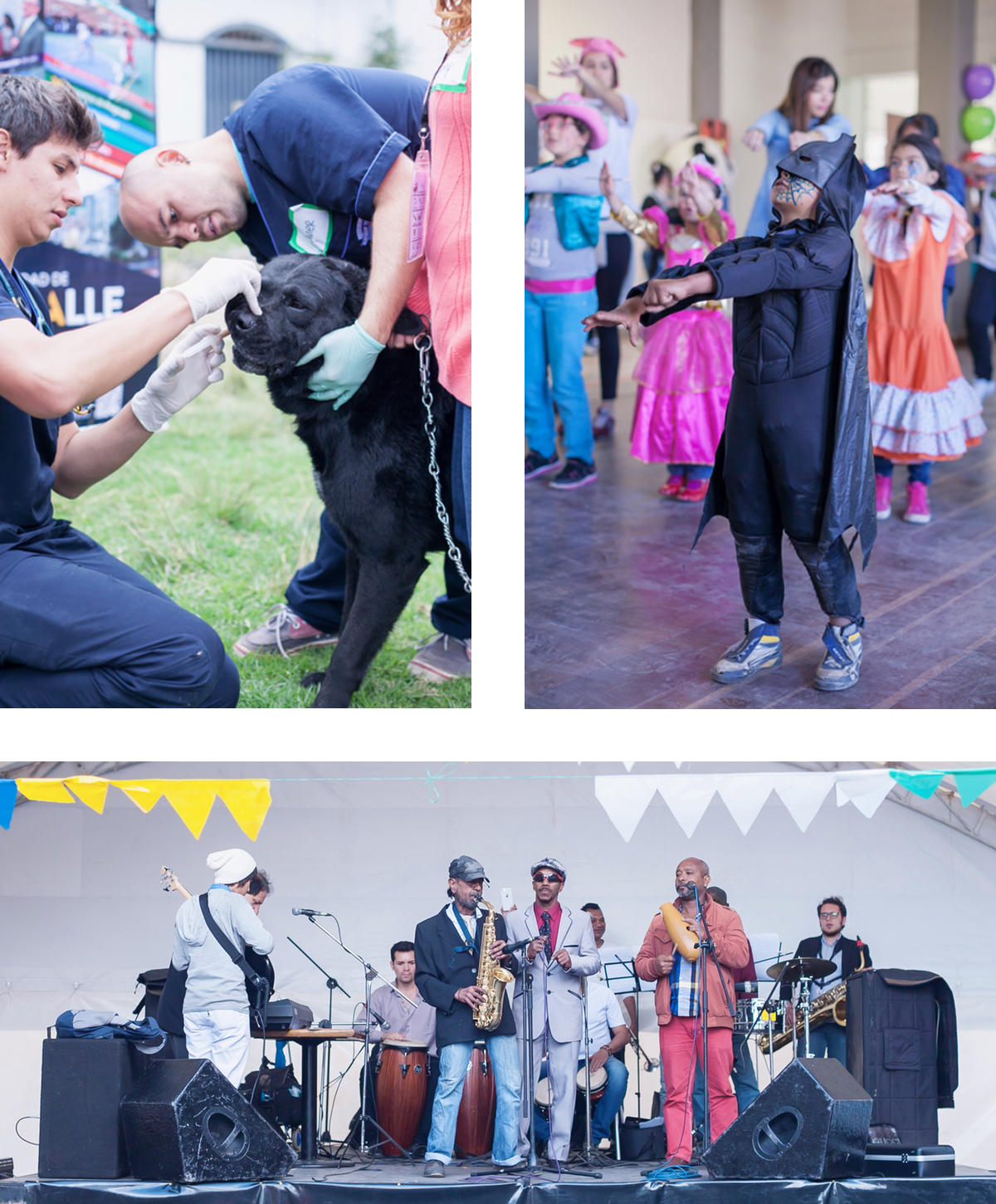 The day’s activities included a children’s Halloween parade, a college student competition for projects to improve recycler/community relations, a team of 15 professional mechanics who fixed up recycler carts, a station in which design students added ergonomic adjustments to recycler carts (e.g., arm cushions, rain covers), a Pimp my Pet station that offered veterinary services for recyclers’ pets, a haircutting station, breakfast and lunch by Crepes and Waffles (a famous Colombian chain), safety equipment kits for recyclers, and a concert by salsa legend Edgar Espinosa and his 6-piece orchestra. 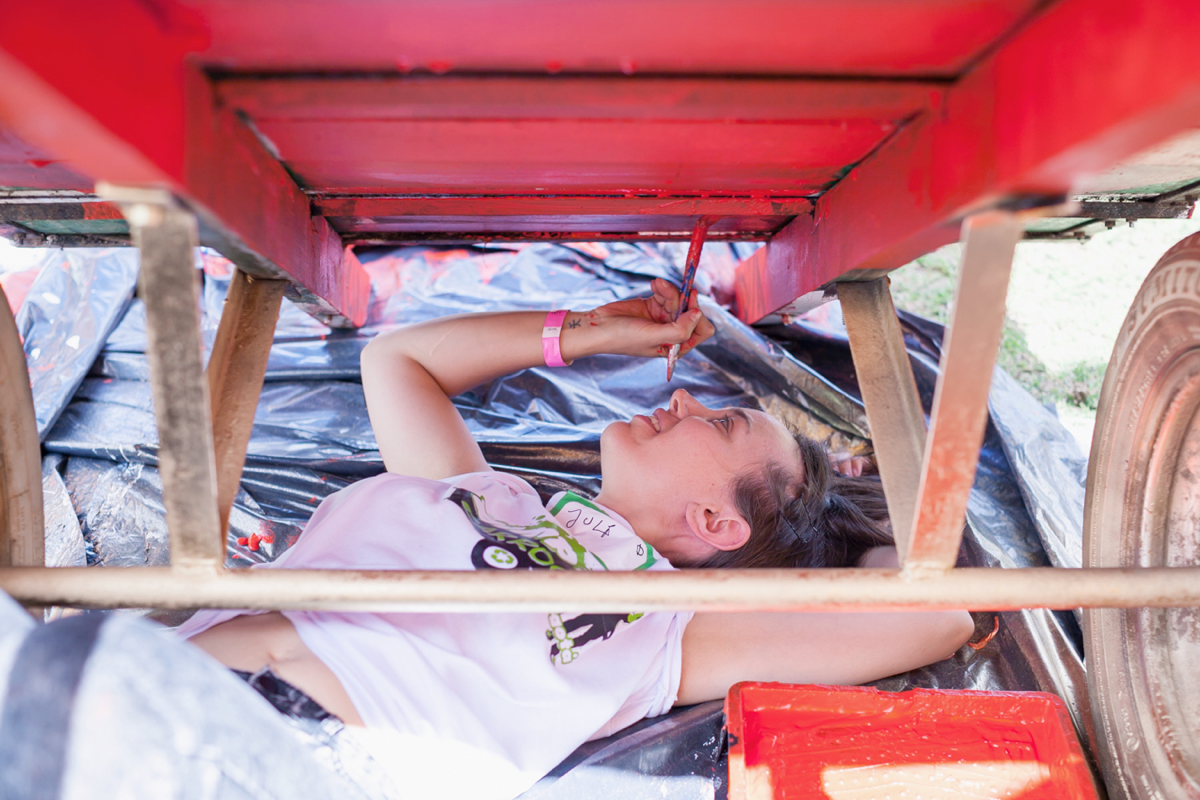 The highlight of the event, of course, was the painting of the carts. Many recyclers requested religious imagery, others marijuana leaves and skulls. Still others wanted animals, space scapes, names of loved ones, and political messages. 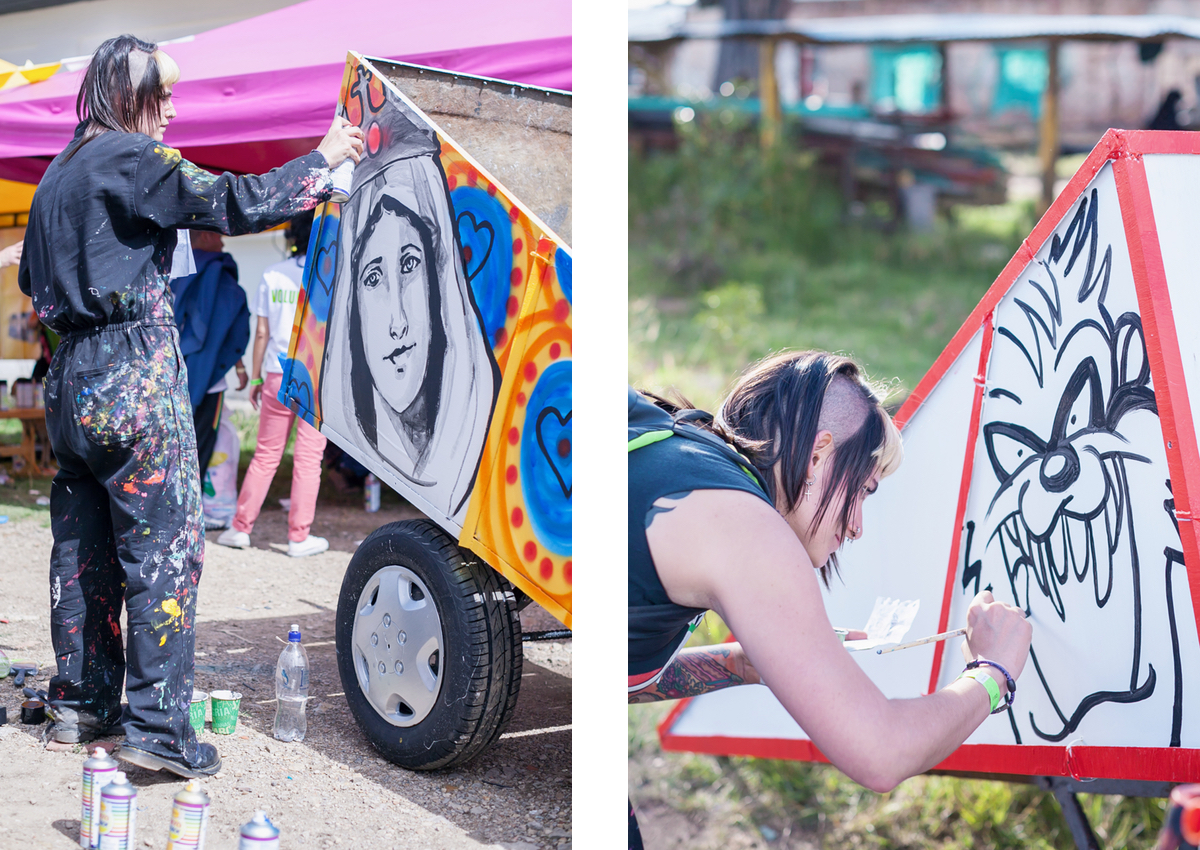 Bogotá-based Artist, Lorena Skunkrocker, told me, “One man asked for Jesus Christ and a Virgen of Carmen on his cart, but no one was volunteering to do it. So I said ‘de una!’ (let’s do it!) Even though I didn’t have the proper tools and [the subject matter] was totally outside of my comfort zone. It was just incredible—I tried out so many new things today. When I finished the cart, the man was very happy—he said ‘you are the most aspera (awesome) artist in the world. Now my cart is a brutal (brilliant) work of art.’”

Skunkrocker continued, “It was one of the mas chévere (coolest) days of my life. I’m so moved. The recyclers’ reaction was brutal—they were so enthusiastic and joyful… One recycler, whose cart I hadn’t painted at all, just came up to me and gave me a hug and said that he loved me so much.” 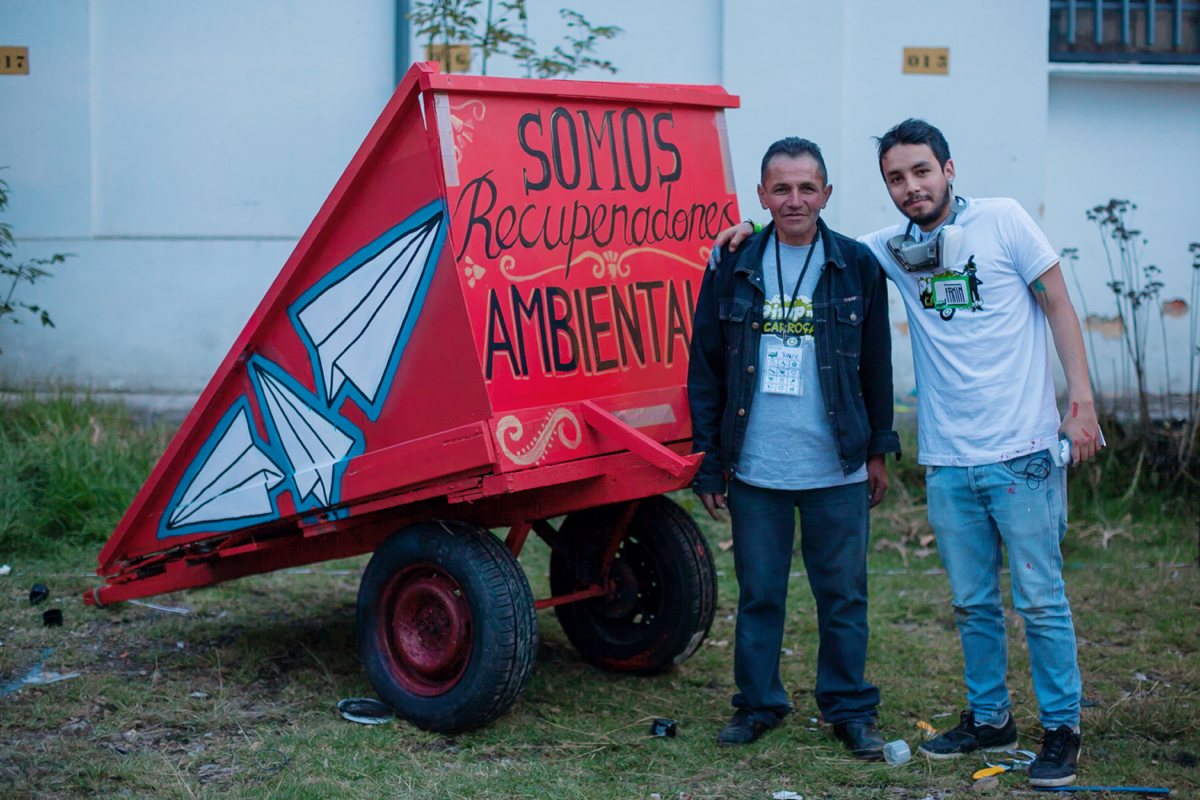 Stigma against recyclers is prevalent around the world, but has manifested in an exceptionally sadistic form in Colombia. Since the late 1980s, fascist-inspired “social cleansing” groups, often acting with police complicity, have kidnapped and killed at least 2,000 recyclers, beggars, and prostitutes—to whom they refer as “desechables” (disposable people). In 1992, eleven corpses of murdered recyclers were discovered at a medical school in Barranquilla. Their organs had been sold for transplants and their bodies used for dissection.

Colombian recyclers face many other forms of discrimination as well. Two recyclers reported to me that up until the early 2000s, police in wealthy neighborhoods routinely rounded them up with other recyclers, jailed them for 24-hours, burned their pushcarts, and forced them to sweep streets. 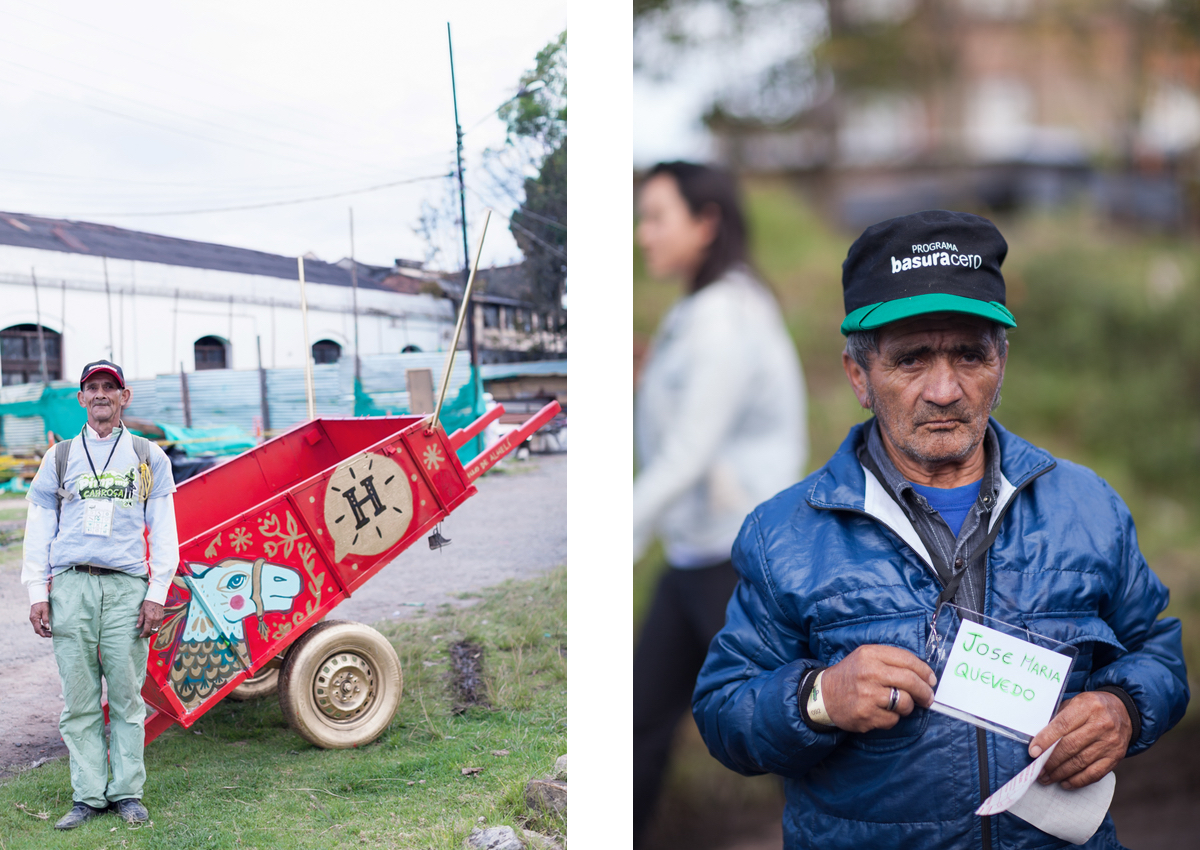 Jose Maria Quevedo, a recycler who participated in the event, said that two of his daughters were denied entrance to a public elementary school in 1998. “They told me there was no space in the school, but when other kids arrived, there was space for them. But not for my daughters, the children of the piojosos (lice-ridden) recyclers. They thought my daughters would rob the other students or even the teachers, but that was all a big lie. We are human beings too.” Quevedo had to fight with the Secretary of Education to win school access for his children and for those of other recyclers. 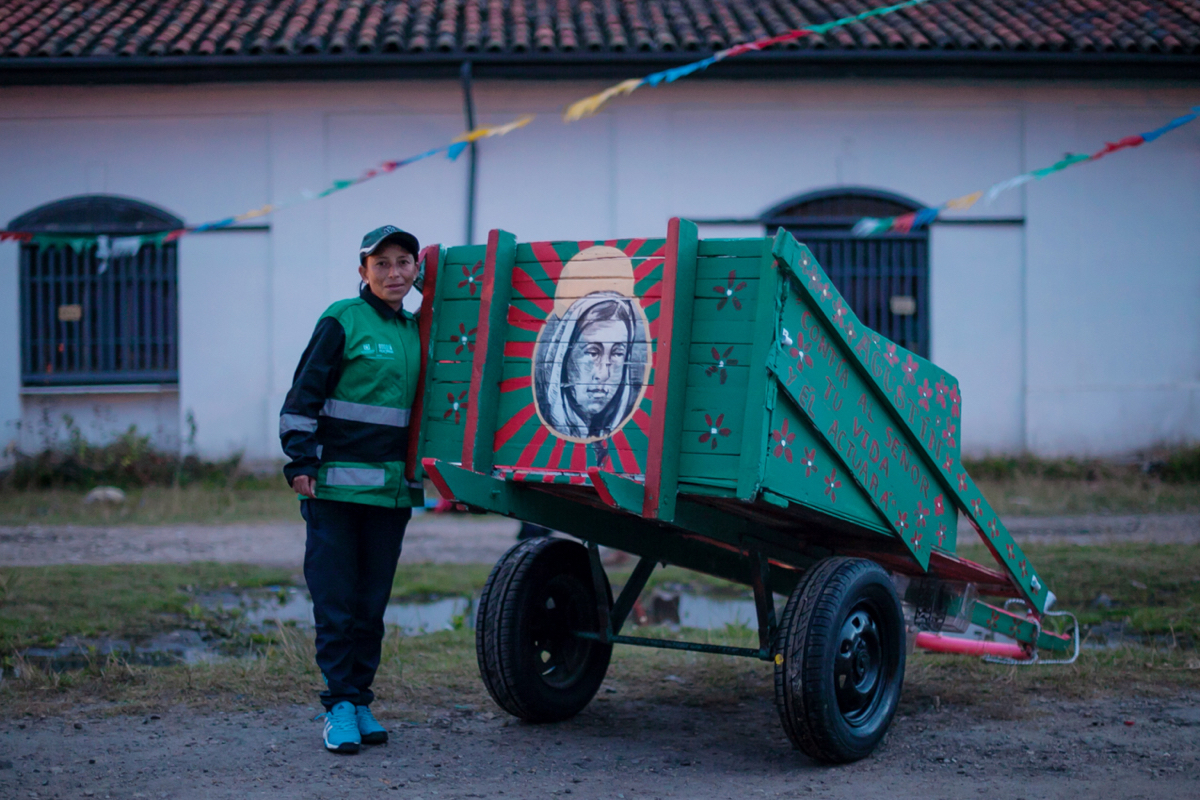 In response to such hardships, thousands of recyclers across Colombia have collectively organized to increase their voice and power. This development began in the 1980s when a Catholic foundation helped recyclers in 20 cities build cooperatives where they could collectively sort and sell their own materials, thereby moving up the value chain. Eventually, the cooperatives built regional, national, and transnational associations aimed at sharing strategies and resources, and collectively promoting recyclers’ political rights. During the first decade of the 2000s, the recyclers and their pro-bono legal aid won seven landmark cases in the Constitutional Court, establishing their right to continue in their trade, and to be recognized and remunerated for their public service. Quevedo says that these victories have improved recyclers’ social standing: “There is no longer such ugly discrimination. That died when they legalized the recycler.”

Bogotá’s recyclers have recently pressured the city government into implementing some of the world’s most progressive recycler rights policies. From 2013-2015, the city government provided 18,000 official uniforms (pictured above) to informal recyclers and gave trucks to 3,000 recyclers (pictured below) who had previously worked by horse-and-buggy. Also, the government began making bi-monthly payments to 13,000 informal recyclers through a historically unprecedented scheme in which recyclers were paid via text messages with codes that were redeemable for cash at ATMs, based on the quantity of goods that they had sold to registered scrap dealers. 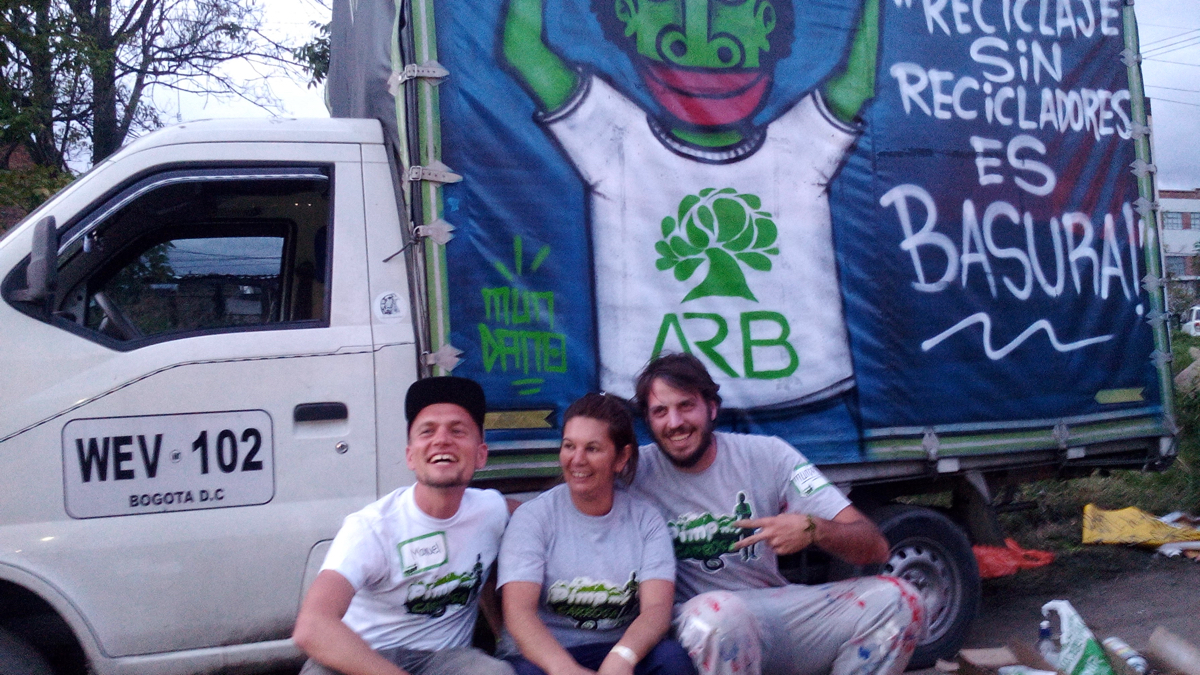 This is a picture of me (left), with Mundano (right), who was on hand for the event, and Nohra Padilla (center), the president of the Asociación de Recicaldores de Bogotá (ARB) and winner of the 2014 Goldman Prize, the so-called “Nobel Peace Prize for environmentalists.” The painting on the truck reads “recycling without recyclers is garbage,” a critique of the private waste firms that seek to take over the increasingly lucrative recycling industry and displace its historic protagonists. 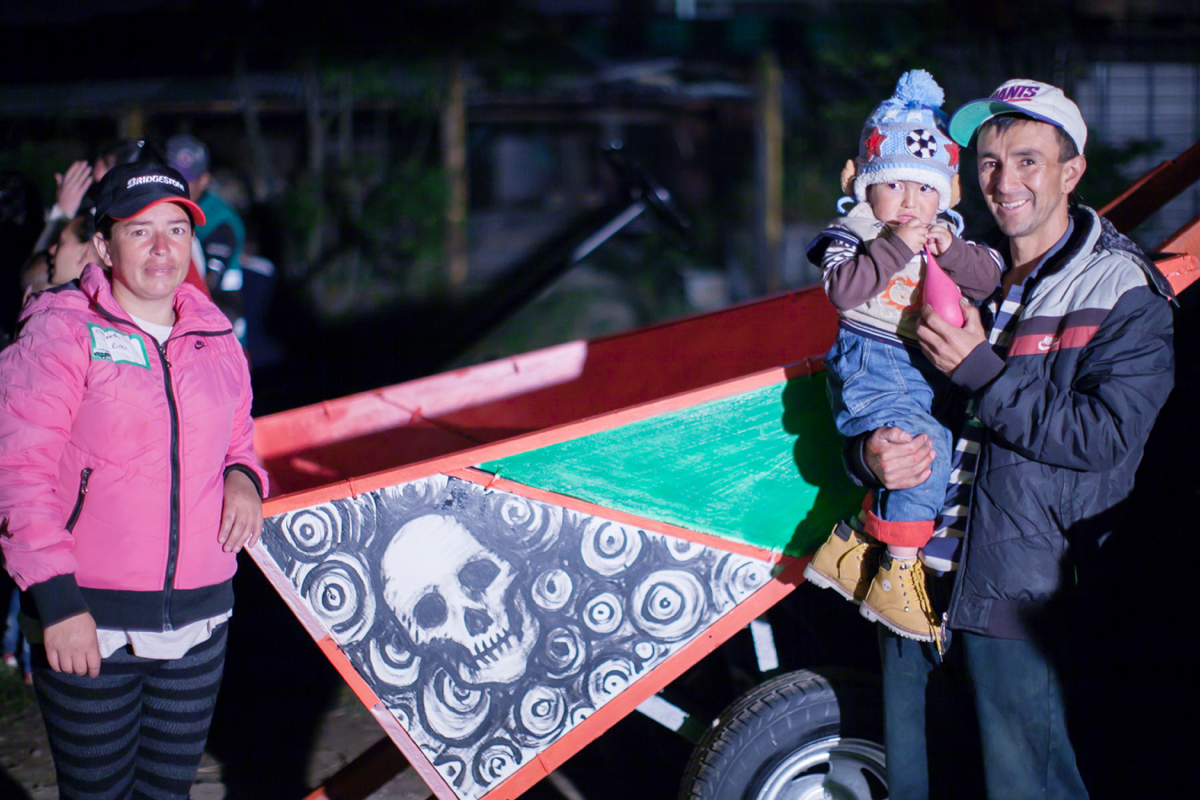 I first met Mundano in São Paulo in 2014, while conducting research for my dissertation, a comparative study of recycler rights movements in Colombia and Brazil. Initially, I was skeptical: was this merely an aesthetic intervention by well-meaning outsiders that sanitized the recyclers’ appearance without improving their material conditions?

I posed this question to Padilla and other recycler leaders in Bogotá, who warned that too much focus on artistic projects could indeed distract from recyclers’ need for material improvements. They argued, however, that when artistic projects were linked to popular recycler movements, the two could complement one another in three concrete ways. First, they argued, art can help recast recyclers’ work from parasitic survival activity to productive labor in the popular imaginary. This directly improves the life chances of recyclers, for whom stigma is often as serious of a threat as low incomes and hazardous working conditions. Second, by visibilizing recyclers’ contributions, art can mobilize popular and political support for policy change. Conventional protests also serve this role, but for better or for worse, art often attracts more media attention, especially when it includes popular participation and a “cool factor.” Thus, the Pimp My Carroça event generated stories in 12 of Colombia’s leading newspapers, new shows, and news blogs, while the media wholly ignored a march of five thousand recyclers just two months earlier. Third, art can help constitute and activate the movement’s base by contributing to the construction of a dignified collective identity. “Recyclers can’t organize politically or economically until they have a measure of self-respect,” affirmed ARB-cofounder Silvio Ruiz Grisales. 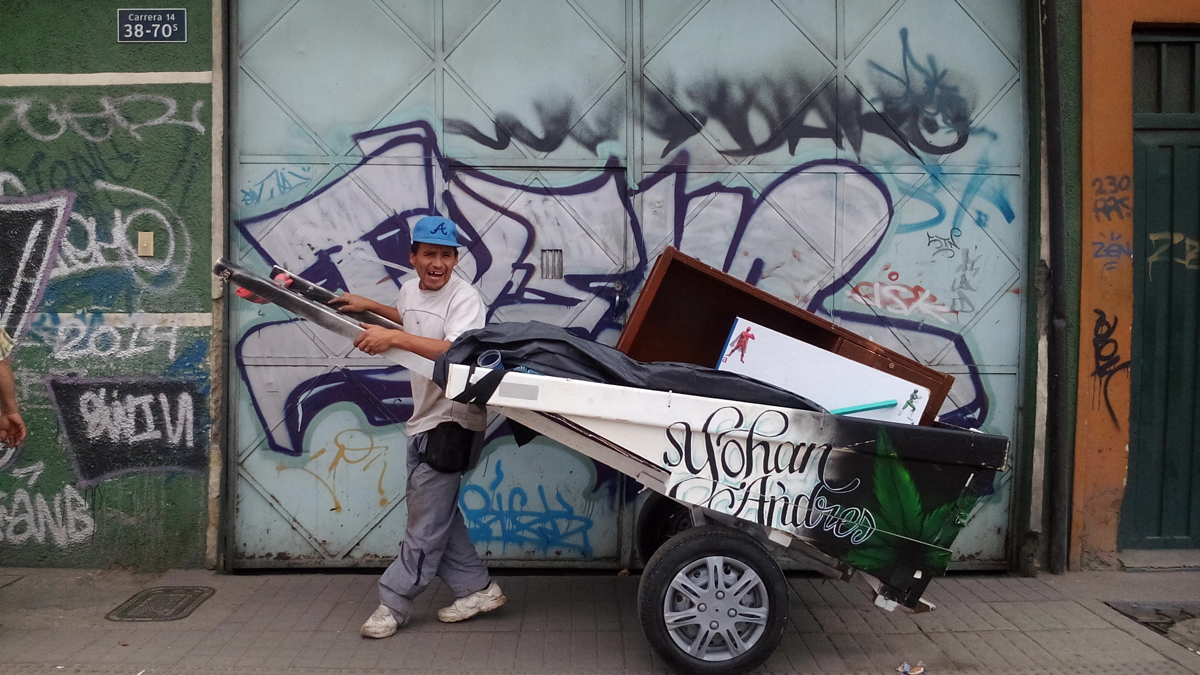 Still with some doubts a month later, I followed up with six recyclers from the ARB cooperative Formando Comunidad (Forming Community) whose carts had been “pimped.” Four reported that people continually stop them to compliment their carts, and others said that residents had started giving them more materials. 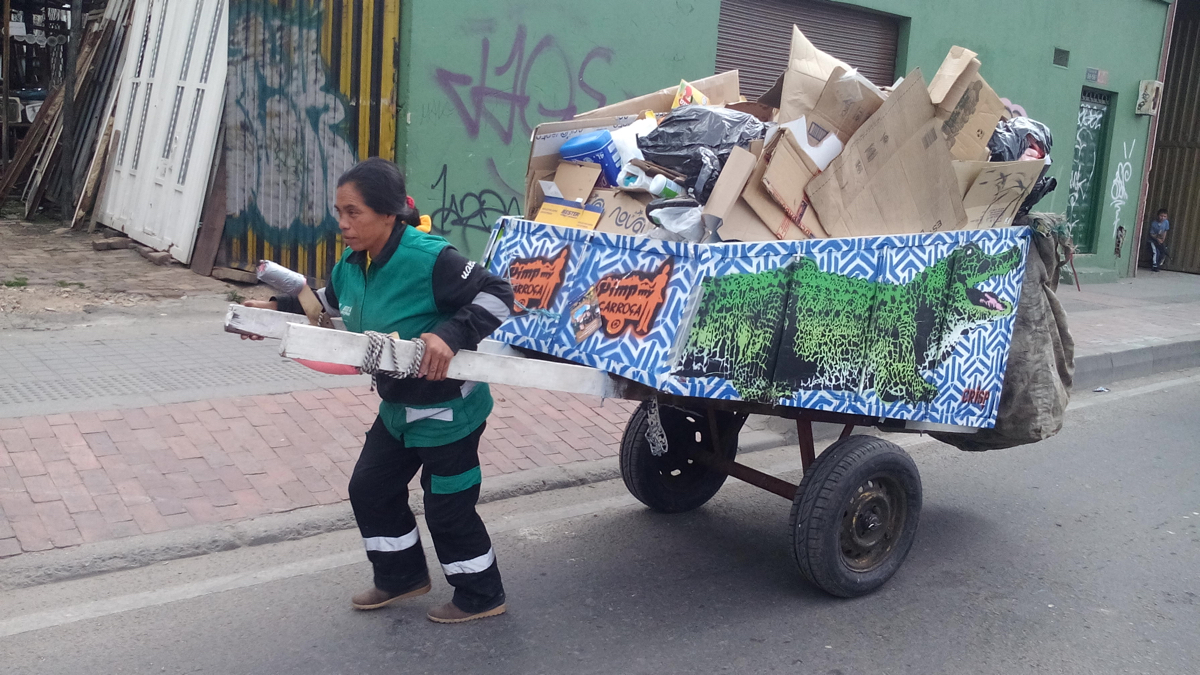 Claudia Celis, who is pictured above, said that the intervention came at an optimal time because her cart had been damaged in an accident and they refurbished it for her. “I feel proud to work with this cart,” she said. “I really hope this is just the beginning. It would be chévere (cool) to do this every year. This could be the start of something much bigger.”

The author thanks La Vida Alegre for permitting the use of her photos, and Adriana O. Sarsynski, Leticia Ferreira, Balmore Luces, Regiane D’almeida, and Davi Amorim for their generous help with Portuguese and Spanish translations. Also, the author thanks the Pimp My Carroça teams in São Paulo and Bogotá for their help coordinating photos and translations, and Pablo Gaston, Katy Fox-Hoddess, and Rebecca Tarlau for feedback on a previous version of the essay. The second edition of Pimp my Carroça Bogotá will be held on November 6, 2016. Donations can be made at gofundme.com/pimpcolombia2016.